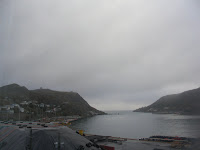 Grey the gulls against the same-hued sky, slates upon a childhood home left long ago on a lonely landscape. Bay water weakly reflects the ghostly colour and lulls the shore where sea and solid meet.

From the open window of the old hotel, I see ridged rock and circular streets. The view forms background tones of an old photograph. Shapes of houses placed by hands stilled for generations. We had composed our lives within the boundaries framed by others. St. John’s. Grey as the old man’s beard. Did I see timeless wisdom or dumb resignation? The mood was in window framed faces. What do they see in mine now as I stare past curtainless panes, wondering why she ever said, “Come back”?

I remember her voice in the jellybean house of yellow walls and summer sun. Her cooking smelled of saffron. Lemon dress. Golden hair. Citron sheets. She had come from the west and would return. I was so sure of that.

Yet I was the one who left. For so many years. But it had to be. The choice was not mine.

Why did she ever send that letter?

Guess you’re kind of surprised to get this. It took me a long time to find the guts to write.

You must have been out for nearly eight months now and I wonder if you’ve found work in Toronto. I guess it’s not easy but don’t they have some programs to help you get started again?

Anyway I was wondering if you don’t find work if you’ll be coming back home. Think about it at least. I know it might be hard at first. There are some folks who still remember. They may never understand. But I’m OK with it now. Really I am. I know nothing will bring Jimmy back and I was really mad and hurt for a long time. I guess I hated you after it happened and didn’t think I could ever forgive.

But Karen has been talking a lot to me over the last two years. She helped me to see that it wasn’t all your fault. You just repeated what had been done to you. I should have seen it coming and done something to help. Maybe I did have a hunch but pretended I didn’t.

Ralph hasn’t been with me for quite awhile. And I was wondering how you are. Karen helped me to understand that you lost your son too and life must have been hell in Riverside.

Anyway why don’t you try it here at least for a couple of months? Come back. I’d really like to talk.

Tracey had loved to talk. Her tongue made the same careless music as her fingers on the old piano that we had bought at auction. I had learned from her, but slowly. Too slowly. The stiff silence of my earlier years for a while had yielded to her language and laughter.

Although I spoke to her, read to her, and gradually shared my secrets, our relationship seemed to remain a friendly mutual puzzlement. Two moons whose fixed orbits ordained an equidistant pattern. No shared apogees or perigees. Never totally apart, never completely together.

And now she wants to talk again.

I used words sparingly in Riverside. Need, defence, attack, deflection. I followed the taciturn institutional habits of my kind, despite the counselors’ attempts to let things flow. There was no point in thinking of renewal, especially after Ralph took my place in her picture. Not having wanted to talk for four years, maybe it’s better I leave it that way.

Karen’s therapy may have been about bridge-building but they cannot seriously believe this canyon can be spanned. The erosion from blame cuts deep and moves wide.

I remember Tracey’s words at the Coroner’s inquest. That part of the transcript simply will not be erased.


How has Jimmy’s death affected you?


I don’t know where to begin. How can I tell you what has happened to me since the phone call that morning? They had found Jimmy in the shower stall at school. Hanging by his belt. How can anyone understand?

15 years. He had his whole life ahead of him.

How do I go on? He was my only child. How do I face my friends and neighbours? I guess I could go back to Victoria. But sometimes I just don’t want to go on. I don’t want to be anywhere.

I suppose I know now how he felt, although I suspected before. Never good enough to meet his father’s expectations. But he hid it. Always the clown, the dressing up, the theatre.

As his father and I drifted further apart in the last couple of years, his moodiness grew more pronounced. He still went through the periods of crazy humour but there were longer stretches of silence and he stayed in his room a lot.

I guess our decision to separate was just the last straw.

Ralph, the one friend who did not cause her discomfort, Southampton poet teaching at Memorial, lover of literature, lager and laughter. He brought all three into our lives. A catalyst to my creativity, a foil to Tracey’s fun, a magic lantern show to Jimmy’s view of the world. Jimmy’s brow would furrow as he tried to solve this wizard’s puzzles and conundrums. Ralph. His windows all opened onto sunlit sea with a limitless view. Mine seemed shut to the night, showing only my own reflection.

He grieved our loss, supported Tracey and was to her what I was not. He had also been to Jimmy what I should have been. Sorcerer and apprentice. Ralph’s caring remained even after Jimmy died.

Too Soon
Where are you young friend?

Who should run joyful in Spring
through streets of laughter
spinning hopes and chanted taunts.

Who should watch
the Summer sunset’s homeward flight
wondering at the feathered silhouettes.

Who should make
Winter angels in the morning snow
to moistly melt at noon.

Like those angels you have gone
leaving not a trace.

The generation’s folly in full flood
overlapped the banks and turned to mud.
We heard no call for help, no urgent scream
as you yielded quietly to the stream.


You left without a sound
without a cry.
No one saw you go
nor waved goodbye.

I came across that in a book of his in the Riverside library. The emptiness. Constantly searching for some new path to follow only to slip into the well-worn ruts of old patterns. I had rejected my religion and my parenting, or so I thought. Even if God were no longer quick, He was an unquiet dead.

Unformed clay in the cradle was moulded, grew in consciousness and knew its place in the universe from the folds of their faces and the sounds of their speech. Their habits turned me on the potter’s wheel of time and the vessel was eventually left at some stage of partial completion. As a container it leaked badly. As an ornament it lacked beauty.

I think that I inherited God, along with my blue eyes and short stature. He was a predatory God who soared on high with all-seeing eye, hunting the slightest wrongdoing. The drop would be swift and the talons merciless.
You ‘ateful little beast! Wish you’d never been born! Knock yer bloody ‘ead off I will!

Voice of mother, voice of God.

Is that the best you can do? Disgusting! You ought to be ashamed!

Voice of father, voice of God.

I loved darkness, aloneness and small enclosed spaces. Invisibility, silence and safety. The cold pain in the belly would subside when I pretended that nothing really existed beyond my sight. Warmth would surround me and behind my eyes was a comforting, soft red light. It pulsed and glowed. I dared not open my eyes for fear that it would be gone when they closed again.

Crucifixes were omnipresent. The cherrywood one with the bronze figure on the bedroom wall. A gift from a father fighting in Europe to his infant daughter, . The silver one around the neck of Sister Sylvester as she walked, brandishing bamboo, searching for a childhood error to punish. The large one with the bloodied plaster Jesus looking mournfully down at the pupil filled rows in the old dark church. Little uniformed beings who were responsible by their sins for driving the nails that hung their Saviour and loosing the lance that pierced His leaking side.

Crosses held the Son of God. God’s son was tortured and killed by those He taught to love.

Did God the Father cry?

Fathers never weep. They watch the deaths of their children with dumb resignation and never cry out.

Does it become hatred of the killers? Little uniformed wide-eyed killers sitting in the pews waiting for communion. Waiting to eat the body of Him whom they had killed with their sins. Would his presence within ensure safety from God’s wrath or would the unworthiness of the place in which the Saviour was confined only worsen their lot? For some of us, the feeling of ice in the belly confirmed our worst fears.
____________________________________________________

St. John’s – Local Teacher Makes Court Appearance
Allan Hornby, teacher of English and drama at a local High School, made a first appearance in Provincial Court today on a charge of mischief and a second charge of public indecency.

Hornby was arrested in front of Mary Queen of Peace church on Torbay Road on Sunday night. He was naked, yelling obscenities and throwing marbles at a stained glass window.

Many of his students, who said he was a very popular teacher, were in attendance for the hearing. Some had been friends of Hornby’s son, James, who committed suicide in April.

The judge ordered a thirty day psychiatric examination to determine whether the accused was fit to stand trial.

Almost five years have passed and I stand again looking at Signal Hill. Now I pass Mary Queen of Peace with no feeling of shame, no feeling at all really. The sight of the University provokes no anger. The harbour holds little meaning. Coloured houses and passers-by on the sidewalk appear to be from a story told to me by someone else. Not a part of my history.

In separating from this past, I seem also to have aborted the future as it might have been. What was I thinking, coming back here?

Holding this phone for an hour, my bowels have frozen, paralysis having extended from my fingers.

And yet, for this I came. I press the keys; hear the dial tone and the click of the cradle as the receiver is lifted.
Hello? Hello . . . Is anyone . . . Allan, is that you?