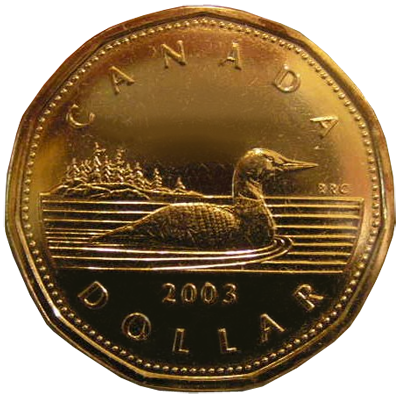 Our beloved Loonie turns 22 today.
For those from below the 49th parallel, this coin was the Canadian government's first attempt to replace paper bills valued at $1 or more with a metal coin.
The design for the coin was going to be something suitably historic with fur traders in a canoe. Our more modern forms of transport (courier truck), however, lost the master dies in transit to the Royal Canadian Mint.
Fearing possible counterfeiting, a different design was ordered and the reverse side was made to show the familiar Canadian bird, a Common Loon. Canadians quickly gave it its nickname which became so widely used that the Royal Canadian Mint has since secured the intellectual rights to the name, although intellectual rights to a "Loonie" sounds somehow oxymoronic or perhaps simply moronic.
Anyway the Loonie, despite some early reservations, became so widely accepted that in 1996 the Mint issued a $2 coint which Canadians rapidly dubbed "the Toonie". The Toonie is decorated with the Queen's head and a bear behind (Polar that is).