A comment from Elizabeth concerning war on a recent post made me think of a quotation from Darwin's The Descent of Man: 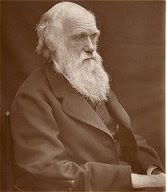 " Man may be excused for feeling some pride at having risen, though not through his own exertions, to the very summit of the organic scale: and the fact of his having thus risen, instead of having been aboriginally placed there, may give him hope for a still higher destiny in the distant future.
But we are not here concerned with hopes or fears, only with the truth as far as our reason permits us to discover it: and I have given the evidence to the best of my ability.
We must, however, acknowledge as it seems to me, that man, with all his noble qualities, with sympathy which feels for the most debased, with benevolence which extends not only to other men but to the humblest living creature, with his god-like intellect which has penetrated into the movements and constitution of the solarsystem - with all these exalted powers, man still bears in his bodily frame the indelible stamp of his lowly origin."

Can we trust that the "hope for a still higher destiny in the distant future" may overcome the affective connections associated with the "indelible stamp of his lowly origin" found in man's bodily frame?

Gosh, I'm famous.... almost.
I do feel very strongly about the use of violence both public and private -though I have lived a very sheltered existence.

I tend to believe that good and bad teeter in an endless balance throughout the universe and in nature.
Am I some sort of nut?
I feel we should strive to do the right thing.(Preach, preach.)
We should always treat others with respect and kindness......even for selfish reasons (!) they tend to be nicer back to you.
I added a note about R. Moses to my blog.
A really fascinating person bith in good and bad ways.
Worth knowing about.
all best wishes