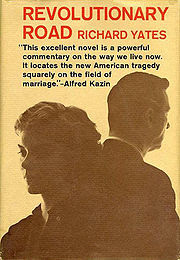 A comment by Elizabeth on an earlier posting persuaded me to read this novel.

Sometimes stories that are moving are described as "unbelievably sad". The impact of this story, however, is that it is so believably poignant. Written in 1961, it explores the loneliness experienced when one abandons the revolutionary spirit, that which pushes us to be the best we can be, for a numbing conformity. The setting is suburban United States in 1955 but the theme is neither place nor generation specific.

The prose is simple, taut and almost journalistic. It is the written equivalent to films, like Rachel Getting Married, that are shot with handheld cameras and give an almost voyeuristically authentic feel to watching people's everyday struggles. The story is simultaneously uncomfortable to read and completely compelling.

Frank and April Wheeler, unhappily unable to deal with their own shortcomings and allowing their dissatisfactions to undermine their marriage, may be flawed individuals but they are not caricatures. The reader enters their experience and it does not feel alien.

The effect of this novel may linger with me for some time.

Now you have to see the movie...
It was not a big hit at the box office because it required a little thought.

this is recommend in embryo