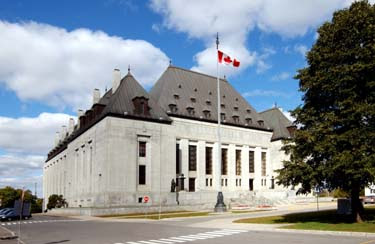 I had previously posted about Mohammed Khadr.

Today the Supreme Court of Canada issued a decision congruent with the elegance and rigorous reasoning that we have come to expect from this institution. Their finding that, although fundamental rights were violated, they cannot issue a remedial order against the Executive of a constitutionally elected government is unimpeachable, much as one might prefer another result for Mr. Khadr as an individual. Although not obliged to act, under normal circumstances a government would be sufficiently embarrassed by such findings of the highest court in the nation to take immediate remedial action. I am not optimistic about this. I have unfailing respect and admiration for the Supreme Court of Canada. My feelings for the present Government of Canada fall in a very different category.

Here are a couple of citations from today's decision:
"For the reasons that follow, we agree with the courts below that Mr. Khadr's rights under s. 7 of the Canadian Charter of Rights and Freedoms were violated. However, we conclude that the order made by the lower courts that the government request Mr. Khadr's return to Canada is not an appropriate remedy for that breach under s. 24(1) of the Charter. Consistent with the separation of powers and the well-grounded reluctance of courts to intervene in matters of foreign relations, the proper remedy is to grant Mr. Khadr a declaration that his Charter rights have been infringed, while leaving the government a measure of discretion in deciding how best to respond. We would therefore allow the appeal in part . . .
We conclude that Canadian conduct in connection with Mr. Khadr's case did not conform to the principles of fundamental justice. That conduct may be briefly reviewed. The statements taken by CSIS and DFAIT were obtained through participation in a regime which was known at the time to have refused detainees the right to challenge the legality of detention by way of habeas corpus. It was also known that Mr. Khadr was 16 years old at the time and that he had not had access to counsel or to any adult who had his best interests in mind. As held by this Court in Khadr 2008 , Canada's participation in the illegal process in place at Guantanamo Bay clearly violated Canada's binding international obligations (Khadr 2008, at paras. 23-25; Hamdan v. Rumsfeld ). In conducting their interviews, CSIS officials had control over the questions asked and the subject matter of the interviews (Transcript of cross-examination on Affidavit of Mr. Hopper, Exhibit "GG" to Affidavit of Lt. Cdr. William Kuebler, March 2, 2005 (J.R., vol. III, at p. 313, at p. 22)). Canadian officials also knew that the U.S. authorities would have full access to the contents of the interrogations (as Canadian officials sought no restrictions on their use) by virtue of their audio and video recording (CSIS's Role in the Matter of Omar Khadr , at pp. 11-12). The purpose of the interviews was for intelligence gathering and not criminal investigation. While in some contexts there may be an important distinction between those interviews conducted for the purpose of intelligence gathering and those conducted in criminal investigations, here, the distinction loses its significance. Canadian officials questioned Mr. Khadr on matters that may have provided important evidence relating to his criminal proceedings, in circumstances where they knew that Mr. Khadr was being indefinitely detained, was a young person and was alone during the interrogations. Further, the March 2004 interview, where Mr. Khadr refused to answer questions, was conducted knowing that Mr. Khadr had been subjected to three weeks of scheduled sleep deprivation, a measure described by the U.S. Military Commission in Jawad as designed to "make [detainees] more compliant and break down their resistance to interrogation . . .
This conduct establishes Canadian participation in state conduct that violates the principles of fundamental justice. Interrogation of a youth, to elicit statements about the most serious criminal charges while detained in these conditions and without access to counsel, and while knowing that the fruits of the interrogations would be shared with the U.S. prosecutors, offends the most basic Canadian standards about the treatment of detained youth suspects . . .
The United States is holding Mr. Khadr for the purpose of trying him on charges of war crimes. The United States is thus the primary source of the deprivation of Mr. Khadr's liberty and security of the person. However, the allegation on which his claim rests is that Canada has also contributed to his past and continuing deprivation of liberty. To satisfy the requirements of s. 7, as stated by this Court in Suresh v. Canada (Minister of Citizenship and Immigration) , 2002 SCC 1,[2002] 1 S.C.R. 3, there must be "a sufficient causal connection between [the Canadian] government's participation and the deprivation [of liberty and security of the person] ultimately effected" . . . "