Was that really 58 years ago? 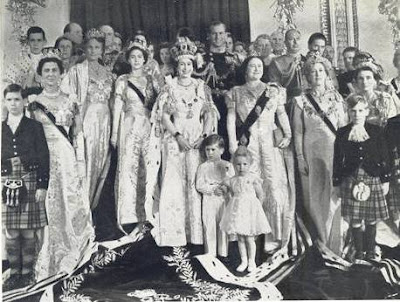 I remember that on this day in 1953 we had one of the few televisions in our village in England and the living room was packed with visitors to watch the first such ceremony ever televised live.

A week or two later those of us who were students at the local school travelled to the next town to see a colour film of the event.

A monarch in a parliamentary system no longer represents the State but the Nation (or Nations in a Commonwealth). Those values which are held most precious by its citizens should be embodied by the King or Queen. Although it is easy to view this cynically in this era, I think that there is still something deep within many of us that wishes for this symbolic blend of the rational and emotional that can seldom be found in political leaders, however charismatic, when they are motivated by partisan concerns and self-interested preservation of power.

Well said, DCW! I also remember the days when leaders had the best interests of the nation at heart. It was what drove them. Today, that is not seen in not countries. Instead, we see examples of self-aggrandizement. Makes one wonder about the future of our world.

I was taken to see the colour film of this in a theatre as well and embarrassed my grandmother with my impatience when I blurted out in a loud voice, "Where's the bloody queen?!"