Then you will know the truth, and the truth will set you free 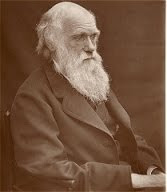 On a clear frosty night I marvel at seeing an infinitesimally small fraction of the 400 billion stars in our Milky Way which is but one of more than 80 billion galaxies that we are presently capable of detecting, their having expanded through space for a probable period of 14 billion years.
I, a small carbon based organism, one of 6.8 billion on a planet in the distant spiral arm of our galaxy, look in wonder at the myriad lifeforms from large to microscopic with which I share this particular environment and with which I share a living relationship that has moved from simple to complex, evolving over millennia.
I ponder the consciousness that has developed to permit my kind to have a glimmer of understanding about the vastness of it all. This reality is such that it needs no addition to inspire awe.
Thank you, Sir, on the 150th anniversary of your seminal publication.