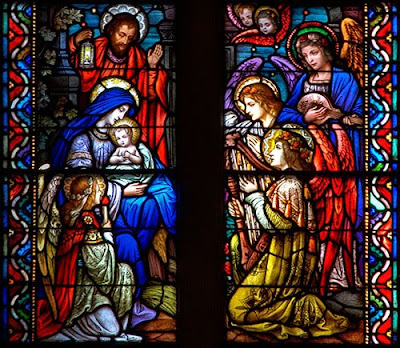 This season has evolved. We often hear laments about its being hijacked by those who profit from consumerism. We are bombarded by self-help gurus focusing on the stress caused by our excessive wants and anxieties. We are admonished to shed shallow sentimentality and "put Christ back in Christmas". But how do we post-Christians divorce ourselves from the falsity, errors and downright wrongs that have been perpetrated in the name of the one whose birthday we celebrate?
___

An early gift this year was being involved in the arrival of Owen. Despite modern medicine, there are preliminary concerns when a new life is on the way. But these give way initially to relief and then soon to the joyful flood of hopes and the aching wish that that this little one's path in life will be happy, a journey through a friendly world surrounded by loving words and supportive hands.
__
What would have been the birth experience of those original Christmas parents if we set aside the stained glass "Photoshopping" of that time?
__
There would have been a risk of loss so much more pronounced than in our times. The hardship of forced travel and the pangs of poverty. What about the aching wish for the future if, as the chroniclers suggested, some foreknowledge of the child's path was known by the parents?
__
And yet we are told there were shepherds. So much can come from the innocence of honest curiosity.
__
Angels? I am afraid my credulity falters here but the feeling of awe at a birth is so tangible one can seem to feel its surrounding presence.
__

The parents? No exaggerated representations necessary. They brought the child to adulthood and his words still resonate for the pure of heart and those who hunger and thirst for righteousness.

Wonderful post! Your initial comments about the meaning of Christmas being altered resonated with me - for the past week, I have been considering doing a similar post (are you surprised by that?). I recently picked up, but did not purchase, Christopher Hitchens book "God is Not Great," in which he describes his descent from Christianity to atheism.
Your Christmas this year, and the many to follow, will be filled with such joy now that baby Owen has made his appearance.
Happy Holidays! Stay dry - however you choose to interpret that!

Sorry - I didn't complete my thought on the Christopher Hitchens book! My final sentence on that thought was to read, "Consumerism, disease and the lack of humanity/abuses being witnessed in the Church,do indeed make one question whether or not the true meaning of Christmas has been lost

Every child is a miracle, and every life a sacred journey.