Once again I am proudly Canadian but ashamed of our present government. 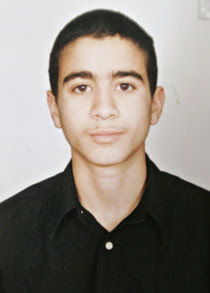 Omar Khadr was a child soldier captured by the U.S. in 2002 at the age of 15 and held on suspicion of killing an American medic in Afghanistan. As with so many others he has been held in Guantanamo without the disposition of his case in violation of basic human rights.

The Canadian Government has been of minimal assistance to this young man. The Federal Court, finding that this goverment's actions have offended fundamental justice, has now ordered the Canadian government to request his repatriation. Yesterday the government said that it would appeal that decision.
Although Canada has ratified the Optional Protocol to the Convention on the Rights of the Child, which states that children under 18 years old involved in armed conflict should be rehabilitated rather than prosecuted, the spirit of that document seems far from the hearts of our ruling politicians.

I view the change south of the border as Americans look to a new leader who won his mandate by inviting changes in the nation by appealing to the best in its citizens. When shall we demand and receive this same bounty?

Yes, this is indeed a sad case.
I really think that unless charges - with evidence - can be made against those held in Guantanamo they should be freed.
We will have to risk the consequences -- and I for one would.