One year later - A long process of healing 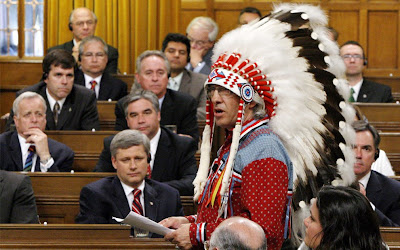 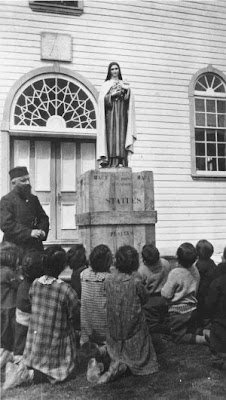 ---
I have been a less than outspoken supporter of our present government in Canada but one thing they have done right is to issue an apology to the Native Peoples for the legacy left by the abuses of the residential school system.
Part of Prime Minister Harper's discourse to the Native leaders seated at the tables of Parliament one year ago said:
"Two primary objectives of the residential schools system were to remove and isolate children from the influence of their homes, families, traditions and cultures, and to assimilate them into the dominant culture.
These objectives were based on the assumption aboriginal cultures and spiritual beliefs were inferior and unequal.
Indeed, some sought, as it was infamously said, "to kill the Indian in the child."
Today, we recognize that this policy of assimilation was wrong, has caused great harm, and has no place in our country.
Most schools were operated as "joint ventures" with Anglican, Catholic, Presbyterian or United churches.
The government of Canada built an educational system in which very young children were often forcibly removed from their homes, often taken far from their communities.
Many were inadequately fed, clothed and housed.
All were deprived of the care and nurturing of their parents, grandparents and communities.
First Nations, Inuit and Métis languages and cultural practices were prohibited in these schools.
Tragically, some of these children died while attending residential schools and others never returned home.
The government now recognizes that the consequences of the Indian residential schools policy were profoundly negative and that this policy has had a lasting and damaging impact on aboriginal culture, heritage and language.
While some former students have spoken positively about their experiences at residential schools, these stories are far overshadowed by tragic accounts of the emotional, physical and sexual abuse and neglect of helpless children, and their separation from powerless families and communities.
The legacy of Indian residential schools has contributed to social problems that continue to exist in many communities today. It has taken extraordinary courage for the thousands of survivors that have come forward to speak publicly about the abuse they suffered.
It is a testament to their resilience as individuals and to the strength of their cultures.
Regrettably, many former students are not with us today and died never having received a full apology from the government of Canada.
The government recognizes that the absence of an apology has been an impediment to healing and reconciliation.
Therefore, on behalf of the government of Canada and all Canadians, I stand before you, in this chamber so central to our life as a country, to apologize to aboriginal peoples for Canada's role in the Indian residential schools system.
To the approximately 80,000 living former students, and all family members and communities, the government of Canada now recognizes that it was wrong to forcibly remove children from their homes and we apologize for having done this.
We now recognize that it was wrong to separate children from rich and vibrant cultures and traditions, that it created a void in many lives and communities, and we apologize for having done this.
We now recognize that, in separating children from their families, we undermined the ability of many to adequately parent their own children and sowed the seeds for generations to follow, and we apologize for having done this.
We now recognize that, far too often, these institutions gave rise to abuse or neglect and were inadequately controlled, and we apologize for failing to protect you.
Not only did you suffer these abuses as children, but as you became parents, you were powerless to protect your own children from suffering the same experience, and for this we are sorry.
The burden of this experience has been on your shoulders for far too long.
The burden is properly ours as a government, and as a country.
There is no place in Canada for the attitudes that inspired the Indian residential schools system to ever again prevail.
You have been working on recovering from this experience for a long time and in a very real sense, we are now joining you on this journey.
The government of Canada sincerely apologizes and asks the forgiveness of the aboriginal peoples of this country for failing them so profoundly.
We are sorry."
______________________________________________________
Fourty-three years ago, as a young man, I worked for a year as a child care worker at a residential school. Having earlier boarded and become friends with young Aboriginal men while attending high school, I started with an idealism of service, feeling that this was a good thing. At the end of the year, although I had seen few instances of the egregious abuse later disclosed, I left convinced that this system certainly was not in the best interests of those it purported to serve.
I hope that the Truth and Reconciliation Commission can now overcome its halting commencement and start promoting the necessary healing.

The more one reads about history, the more one discovers unfortunate and terribly sad things.
So, I say to those who paint the past in a very rosy light that, maybe, tentatively maybe, things are getting better